If you are a Disney veteran, or even if you are new to experiencing the parks, you might have heard the phrase ‘Spread Pixie Dust’ at Disney World.

Spread (or spreading) ‘Pixie Dust’ is describing a moment of unexpected magic at Disney World.

It could be something a cast member or Disney employee has done to help make your trip more memorable and magical.

It might be as simple as handing your 4-year-old a free balloon at the Mickey’s Not So Scary Halloween Party. Or it might be a cast member telling you that Mickey has your Mickey Ice Cream bar covered because you can’t remember the pin on your MagicBand. True Stories by the way, in both cases.

If could also be something huge, like being upgraded to the honeymoon suite on your wedding anniversary or having your dinner on the house at Cinderella’s castle.

Whatever the case might be, pixie dust is sprinkled freely by cast members and is usually unexpected. That’s the beauty of it. You don’t head into the parks expecting pixie dust. There really is no magic in it if you do that. Instead when the pixie dust comes, it catches you off guard and brings extra joy to your trip.

Now, we all love to be the recipients of pixie dust, I’m sure of that. Yet, one thing I’ve found to be even more magical? Is being the spreader of pixie dust!

How can you spread pixie dust if you’re not a cast member, you ask? It’s actually really simple. Just think of kind actions and deeds you can do for other park goers. Take a biblical perspective and think of the ‘Golden Rule’. Jesus said to ‘Do unto others as you would have them do unto you’. How would you like to be treated when you’re at a Disney park? This might take a lot of grace some days, but it is totally worth it. Keep reading for a few ways to spread pixie dust at Walt Disney World.

1. Look the Other Way

It’s no secret that Florida can get pretty warm in the summer months.

This makes people uncomfortable, who can ultimately get cranky.

Hot people who are hungry and standing in two-hour lines can get super, super crabby.

If you act in response to the heat and give back to people ‘what they deserve’, you’re just serving up a dish of crankiness back to these people. Instead, spread a little pixie dust in the cheapest way possible by looking the other way when someone faults you. It might not be the easiest way to spread pixie dust, but it can be the most rewarding.

Want a quick example? If you are on a bus and someone isn’t scooting back farther, instead of getting super angry at them, take a moment to think about their situation. Maybe they have a fear of enclosed spaces and being super close to other guests is making them pretty anxious. Or maybe their knees are aching from a day at the parks and the thought of climbing up two more steps to move to the back of the bus is enough to put their pain threshold over the edge. Instead of getting crabby, ask if you can sneak by to make more room on the bus. You might be saving them a few aches and pains from climbing up a couple of steps.

You know those iconic, chocolate, yummy ice cream treats you can purchase as about 1 million locations throughout Walt Disney World? It seems like everyone loves them. No matter where you go in the parks, people are buying them left and right.

As a matter of fact, if you’re in the parks, you might be standing in line to buy one right now. If so, look behind you and maybe make some small talk. Is the guest behind you planning to buy a Mickey Bar as well? You could totally make their day by telling the cast member you have that person’s Mickey Bar covered when you purchase yours. As a matter of fact, you don’t even need to make small talk. You could just go ahead and buy it for them. Being right by the cart to see their reaction once the cast member spreads the news, might not be possible. However, the satisfaction of knowing you made someone’s day will be enough! 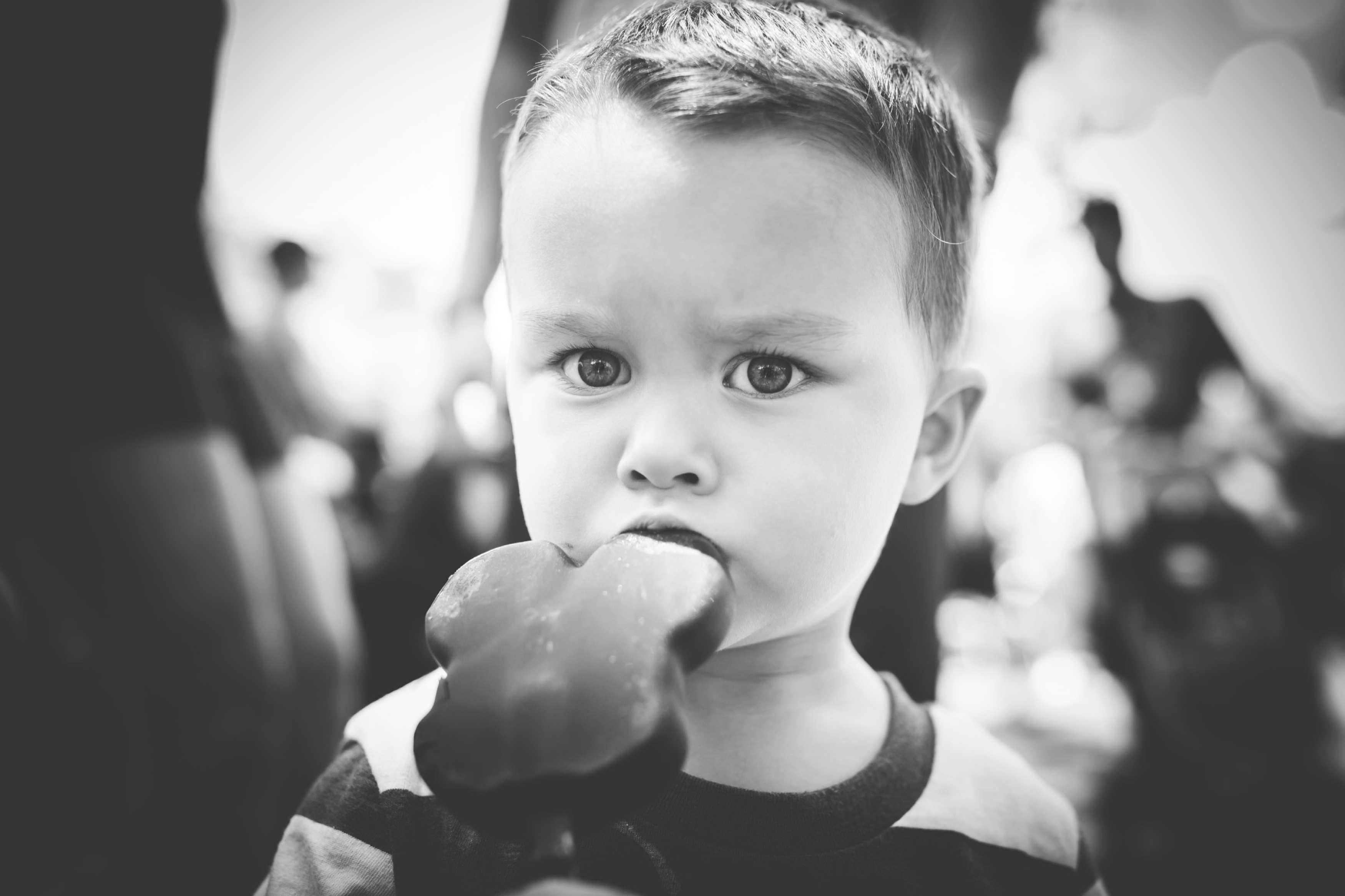 Similar to the situation above, you might be able to spread a little pixie dust by sharing your Mickey balloon as you leave the park. If said Mickey balloon was originally purchased for your little one, you will need to get them on board before you carry out this act of pixie dust.

With everyone on board, as you are leaving the park one day you can hand off your balloon to a little kid coming into the park. I guarantee you’ll make their day when you hand them your Mickey balloon. Probably their parent’s day as well! Older children might be all for this act as they see how cool it is to spread pixie dust. You could even go as far as buying a few Mickey balloons and then hand them out as you are exiting the park. My son was gifted a MNSSHP balloon at the end of our party night on Halloween, and it was like he won the lottery! Just a simple act that can make a big impact!

This one might seem a little silly, but you might just start a chain of events. Let’s say you are standing in the stand-by cue and there is a family with young children behind you. Those young children might be getting a little antsy, standing in line is hard! It might not be much, but you could allow them to go ahead of you in line. If you let them go and then the person in front of you notices how antsy they are, they might let them move ahead as well. A little chain reaction like this might not occur, but if it does that family would probably feel extremely grateful. Or if they just move ahead of you in line, they will feel the pixie dust coming from your gesture.

Do you plan on buying a super lightweight stroller to use during your time at the parks? Maybe even purchasing it down at a store close to Walt Disney World? If you don’t plan to bring that same stroller home with you, you might be able to spread a little pixie dust by sharing the love with another guest. How so? As you are leaving you can offer to a guest entering the park. Look for a guest with a small child but without a stroller. They might have intended on renting a stroller or they might have planned to carry their little one all day. If they are a first time park goer who planned to carry their little one, half way through the day they might regret not having a stroller. Bam! Here you come spreading pixie dust like glitter, offering them your stroller. You’re like a little pixie dust angel coming to save their tired arms.

Florida, and specifically Orlando, is known for its quick mid-day rains. Sometimes the rain comes down as a quick sprinkle and sometimes it’s a huge downpour. One of the best items you can bring along for your Disney trip is a poncho. Ponchos are so small and lightweight you can easily pack a few extras in your bag to bring along with you. You will seem like an angel when you offer an extra poncho to an another guest!

A super inexpensive way to bring a little pixie dust into the parks is to bring a handful of Mickey stickers. My kids LOVE getting Disney stickers when they are in the parks. Whether it be at restaurants or after a meal, if they score a sticker it’s a good day. It might be a little weird to hand out stickers, but you could leave stickers in secretive places to be discovered by other guests. Placing the stickers in well-known areas would be helpful so they don’t become knocked down and lost, becoming ‘litter’. A few examples might include inside of a rental locker, near the penny pressing machines, or near the condiment areas at any of the quick service restaurants. If you see a family trying to grab a picture with their cell phone, maybe stop and ask if they want a photo taken. I can’t tell you how many times I wanted a photo of my family of four at a spot that a Photopass photographer wasn’t located. It can be super awkward to ask a passerby to take a shot, because you don’t know if they are in a hurry. Plus you really don’t want to interrupt anyone’s vacation. If you make the first move and offer to take a photo you most likely are doing a world of favor for a family. Your kindness won’t go unnoticed!

I bet that same family would be more than willing to snap a quick photo of you and your family as a returned favor. Oh, quick side note, some families might just want a selfie and decline your photo offer. No love lost there, selfies are a necessity at Disney!